Today I was taken on a tour of the Great Wall. We travelled to Yanquing, Changping & Chaoyang. Stephen Gomez (HEA/Plymouth and soon Pearsons) and I travelled by a tour bus along to the Ming Tombs. At the Ming tombs our guide, Christine showed us a number of antiques and explained that the emperors tomb was in the mountain and that until they had the technology to prevent any destruction of the tombs they would not be excavating it. She taught us about a Chinese symbol for the dynasty or royalty ( I can’t remember but it was three horizontal lines, with a dot under the bottom right corner with a square around the whole thing to represent the land. It was really interesting. Then to the Jade Factory where we had an early traditional Chinese meal and then to the Great Wall. I was quite impressed at my use of chopsticks. It was very busy, we had to queue for over an hour, but the sun was shining and many of the people in the line were of variety of nationalities so we had a chat with them. Our tour only had 6 people and some of them walked up the wall. We decided to pay the £10 or 100RMB? to use the cable car. At the top we walked along the wall up to the tower and then turned round and queued to get down again. But it was a beautiful day and we had a great time. On the way back we stopped at the Silk factory and I bought a silk duvet and two pillows! They showed us how they made the silk there. The photos below are from the whole day. I forgot to mention that we also went through the Olympic Village and we saw the Bubble Cube and Birds Nest. 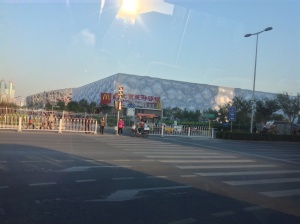 Working in the UK, based Higher Education, using technology to live and learn. Researching the impact of digital on the day to day experiences of commuter students www.about.me/fionaharvey View all posts by Fiona Harvey